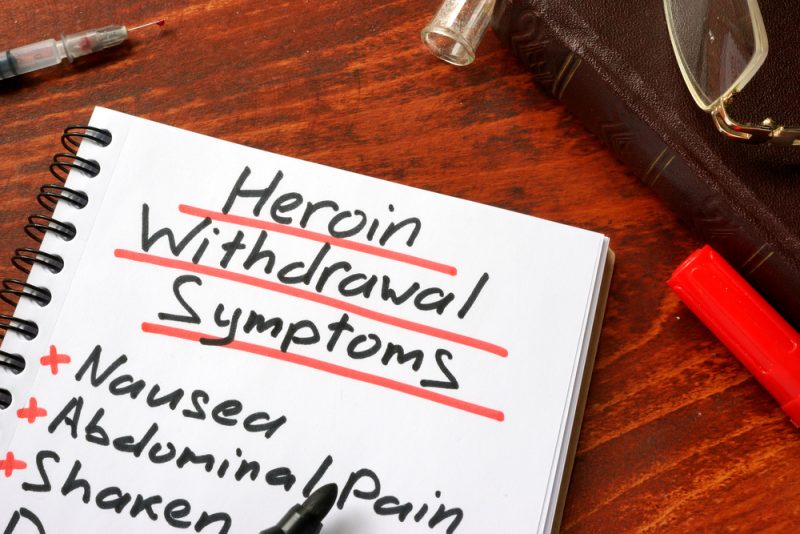 Heroin is a highly-addictive drug, commonly used for recreational habits to obtain feelings of relaxation and euphoria. Although most first-time or casual heroin users don’t expect to become addicted, heroin is a strong substance that can quickly cause dependency.

As one of the most commonly-used drugs in Canada, many Canadians know about the harmful short and long-term effects of using heroin. However, it is the heroin withdrawal effects that not everyone is familiar with.

When an individual attempts to rid their body of the need for heroin, the detoxification process will begin. It is ideal that each individual is aware of the potential symptoms of heroin withdrawal, so that they may better prepare for the experience.

Consider the following information if you’re not sure what to expect during heroin withdrawal.

If taken enough times, the intensity of cravings for heroin will intensify when the substance begins to leave the body. Cravings are also felt when there is a desire to remove the negative feelings associated with withdrawal.

In many cases, users will continue to obtain heroin to avoid the intense cravings, and as a result a dependency can begin to take place. During detox, it is critical that users fight their cravings, so that they may move on to the next phase of recovery.

Experiencing the feelings of euphoria from drug abuse can only last so long, and as that high comes down, withdrawal can cause anxiety, irritability, depression and more.

These feelings might also intensify for those who are experiencing stressful situations, or who have dealt with suppressed feelings from negative past experiences.

If you’re not sure what to expect during heroin withdrawal, prepare to feel a lot of negative emotions as the substance leaves your body. Keep in mind that having a strong support system in place during detox can help to offer encouragement and stability.

Common symptom of heroin withdrawal include nausea and vomiting, which often also result in dehydration and exhaustion. Individuals who experience these symptoms should remember to hydrate and get their daily vitamins, since appetite may also be lacking.

Heroin is an opioid, which means it has the ability to block feelings of pain. When an individual is in withdrawal, it is common for any sores or pains to return. Plan to feel an all-over ache, particularly in the legs and back.

Meny addicts report having troubles sleeping during withdrawal, and heroin is no different. Addicts may experience sleepiness, restlessness and nightmares that cause added feelings of anxiety and stress.

When an individual goes through withdrawal of heroin, the body has to work to re-balance itself again. This means working to get rid of harmful toxins and re-establishing the inner fluids. As a result, detox might be the cause of excess sweating, tears and a runny nose.

For those who don’t know what to expect during heroin withdrawal, it’s important to know that every individual’s experience will be different. Symptoms typically begin 6-12 hours after the last use, peaking at 1-3 days and ending after 5-7 days.

Withdrawal can be dangerous for many people, and it is suggested that you have someone with you during this part of the process to ensure your safety.